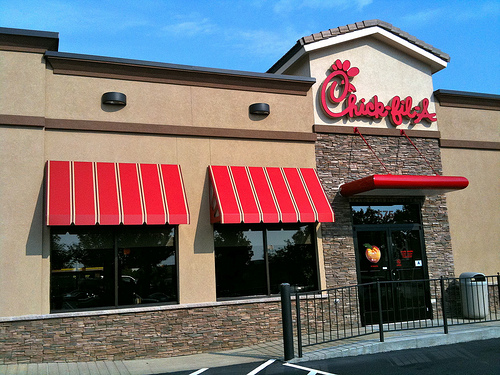 I'll take any opportunity to mention it
You might have heard about the big ruckus down in Atlanta, with a big snowstorm bringing the city to a grinding halt. I guess people are blaming the governor. I sure know what that is like. I didn't want to pile on, you know? Plus as a Tea Party advocate I didn't know what to say. Should I argue that private industry would have done a better job of salting the roads? Heck no, even I know that's dumb.
But you know I had to interject myself into this big story, because that is how you get headlines. Plus, everything is about me in one way or another. Sometimes it just takes a little while longer for you to work out what the angle is, though.
Imagine how relieved I was when I learned that Chick-Fil-A has been delivering meals to stranded motorists on Atlanta's interstates! It's the perfect opportunity for me to throw my faithful followers a wink and a nod, while still flying under the radar of the Lamestream Media.
You and I know that when I say Chick-Fil-A, I mean "opposition to gay marriage and homosexuality in general." I mean, as I am happy to tell anyone who will listen, I have a gay friend. But still, gay sex is wrong and God hates it and that is why I support fine upstanding establishments like Chick-Fil-A, which are not only gay-hating, they also close Sundays because Jesus didn't want anyone to buy chicken sandwiches on Sunday.
We don't have Chick-Fil-A in Alaska, which is kind of surprising, since in my stint as mayor of Wasilla I turned it from a sleepy little backwater town to a shining collection of big box retailers. Wasilla went from being a cute little town where everyone knew their neighbor, to a sprawling suburbia of brand names and vast expanses of pavement and parking lots. It was pretty awesome!
Mentioning Chick-Fil-A is a great way for me to give the thumbs up to my people. Call it an "invisible dog whistle" if you want, I think that is kind of demeaning. I prefer to think of it as secret code, like when the persecuted Christians had to wear those little fish symbols on their cars so they could recognize each other.
I had a lot of thoughts on the State of the Union, but no one cares about that. They all got what I was saying about Chick-Fil-A, though! What can I say? My people know me.
< Previous post:


Hmm, how can I bring people down before the Super Bowl?