My Todd’s finally on reality TV!

My Todd’s finally on reality TV! 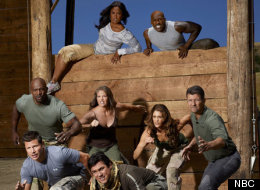 I'm just so gosh-darn proud that I can finally announce hubby Todd's new project: he will be appearing on the NBC reality TV show "Stars Earn Stripes." And it's for our sons and daughters in the military! Take that, liberal military haters! Wink!

Me and Todd - but mostly me - have been stumping for Todd to get himself on a reality TV show for ages now. He was hardly ever in my star tour de force "Sarah Palin's Alaska." Mostly he just stuck to the background, cleaning off tables, picking up the kids at school, that kind of thing. Well it is time for him to go out there and shake his moneymaker, and by "moneymaker" I mean "the Palin name," of course!
"Stars Earn Stripes" is kinda like one of them old fashioned game shows, the kind from back when America was strong and knew where it was going. Like "Battle of the Network Stars," a strong Reagan era game show if ever there was one. It's like that! Like America and heartland and family first, strong and proud and… um… Paul Revere, you know. What was I saying? Gosh.
Anyway.
This show is super tough and super butch, which is perfect, because so is my Todd! And it's good exercise, keep him out of trouble, off the streets, away from any other ladies, if you know what I mean. I thought about paying someone to walk him like a dog, I guess you call that a "personal trainer" if you're one of them city slicker liberal ivory tower elitists. But Todd wouldn't have it, and after we picked up all the stuff we threw at each other, I finally counter-offered with boot camp. Which is kind of what this show is, boot camp. Close enough. I wasn't going to back down from that fight, no flippin' way! But Todd was pretty fixed in his idea not to do that. So this was a great compromise.
The idea is, you do this super elite stuff, like getting dropped from helicopters in the wilderness and stuff. So cool! It's perfect for Todd, because he is like a superhero or something. And the money you win, it goes to military charities. Which is also great because you know how we support the troops, America America! I don't support the troops in the sense of bringing them home so they stop getting killed. But I sure am in favor of meaningless charity stunts that make us look good AND get us on television, you betcha!
< Previous post: